A Desert Garden for Lent 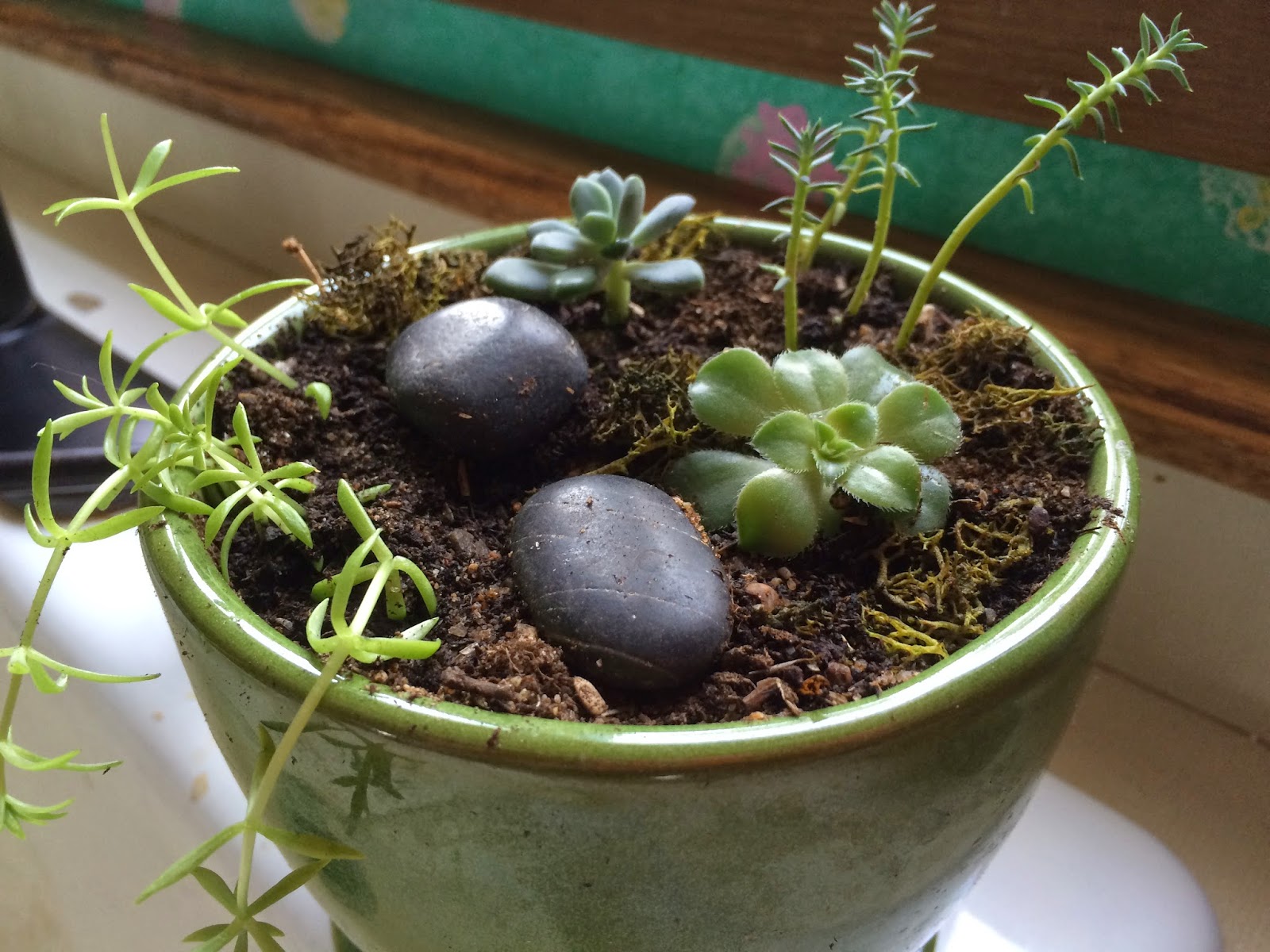 About three years ago I "retired" from full time work. I'd had a full time job of one sort or another since 1981. Suddenly, my days were free, as I now work as a waitress three or four nights a week at a steakhouse (which, by the way, is a job I absolutely LOVE!)

Anyway, now that my days are free, I like to attend daily Mass at the local nursing home, which is run by the Daughters of St. Mary of Providence. Rosary is at 9:30 followed by Mass at 10:00, Monday through Saturday. I am able to go most days. Quite a blessing.

Anyway, last year during Lent, the nuns had the neatest little succulent garden in a planter near the altar and I just loved it. I thought it was a nice representation of Christ's days in the desert before he began his public ministry. (See Mark chapter 4 and Luke Chapter 4.) So I went out and bought myself a little potted "desert garden."

I placed it on the dining room table and Tim and I were reminded at every meal that we were in the "desert" of Lent.

Of course, the plants grew - and became rather overgrown over the past year. So just a couple of days ago I pulled all the plants out and replanted pieces of them. The nice thing about succulents, according to a Google search, is how easy they are to propagate! I cut the four different styles back and replanted them. The site I found said to keep the soil moist for a month, watering twice a week, and then to cut back to monthly waterings. This will give the roots time to grow and to establish. I probably should have done this a bit earlier, so that my "desert garden" will be ready for Lent - but I think it will be just fine!

Notice the rocks...they were part of the original potted garden. I wish I'd taken a "before" shot, but alas, I didn't think to do that. Ah well. Just imagine an overgrown patch of succulents!

I hope you find a bit of inspiration in this little project of mine. Maybe you'll even plant a desert garden for your Lenten season! 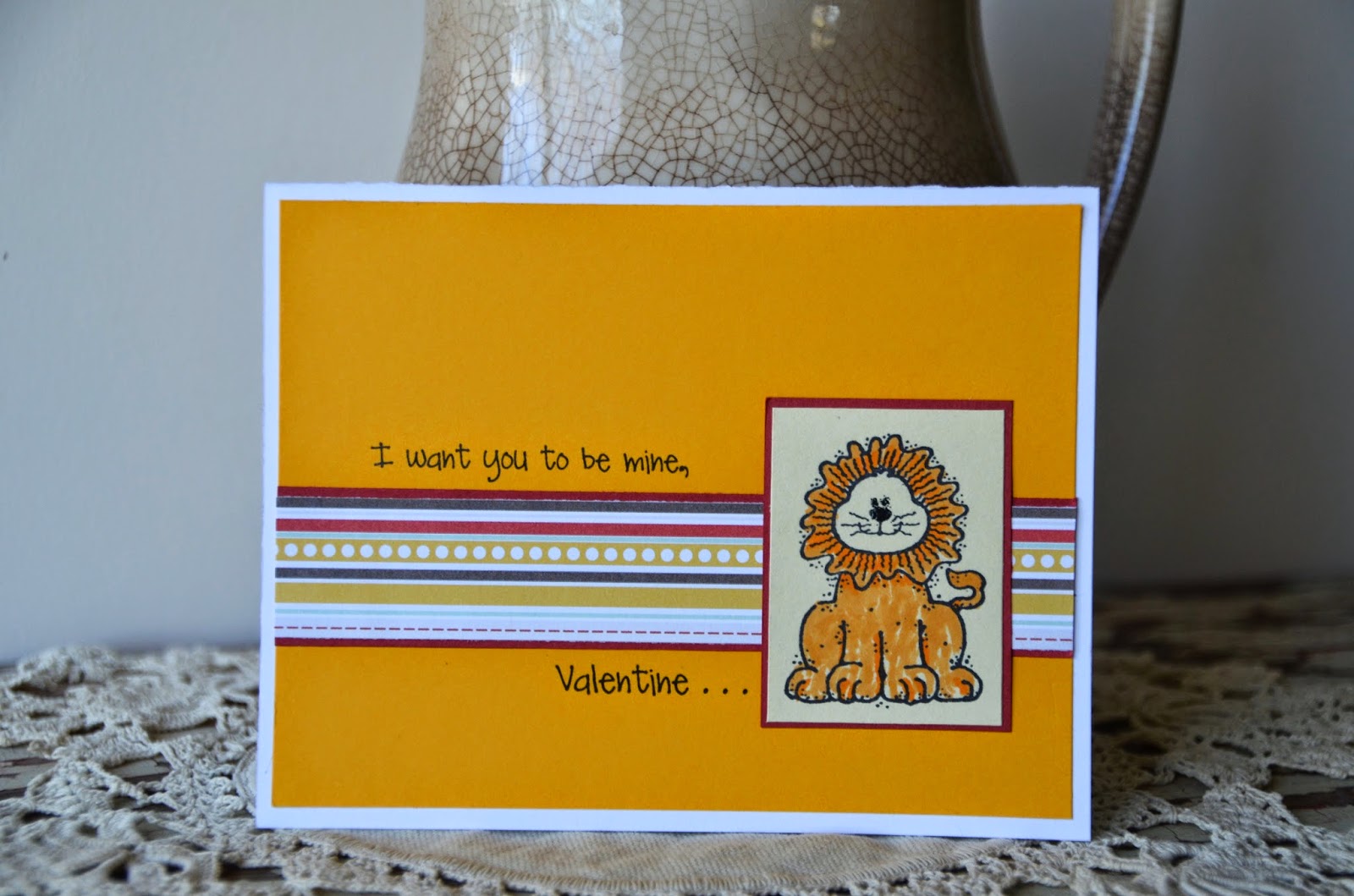 Hmmm. Instead of cleaning house and putting away my Christmas stuff (yes, I still have Christmas up) I decided to make Valentine cards. Nothing wrong with that, is there?

Here's a shot of one I made this afternoon. The cute little lion is a rubber stamp from Alias, Smith and Rowe. I've had it for at least 12 years....

I stamped it in black onto a pale yellow card stock and colored using Tomboy markers. I embossed the eyes and nose with some fine black embossing powder. I layered this onto a piece of red card stock

I then layers a strip of patterned card stock (with reds and yellows) over a strip of red card stock. I then used my laser printer to print the verse for the front of the card onto deep yellow card stock and layered the whole thing onto a piece of white card stock. 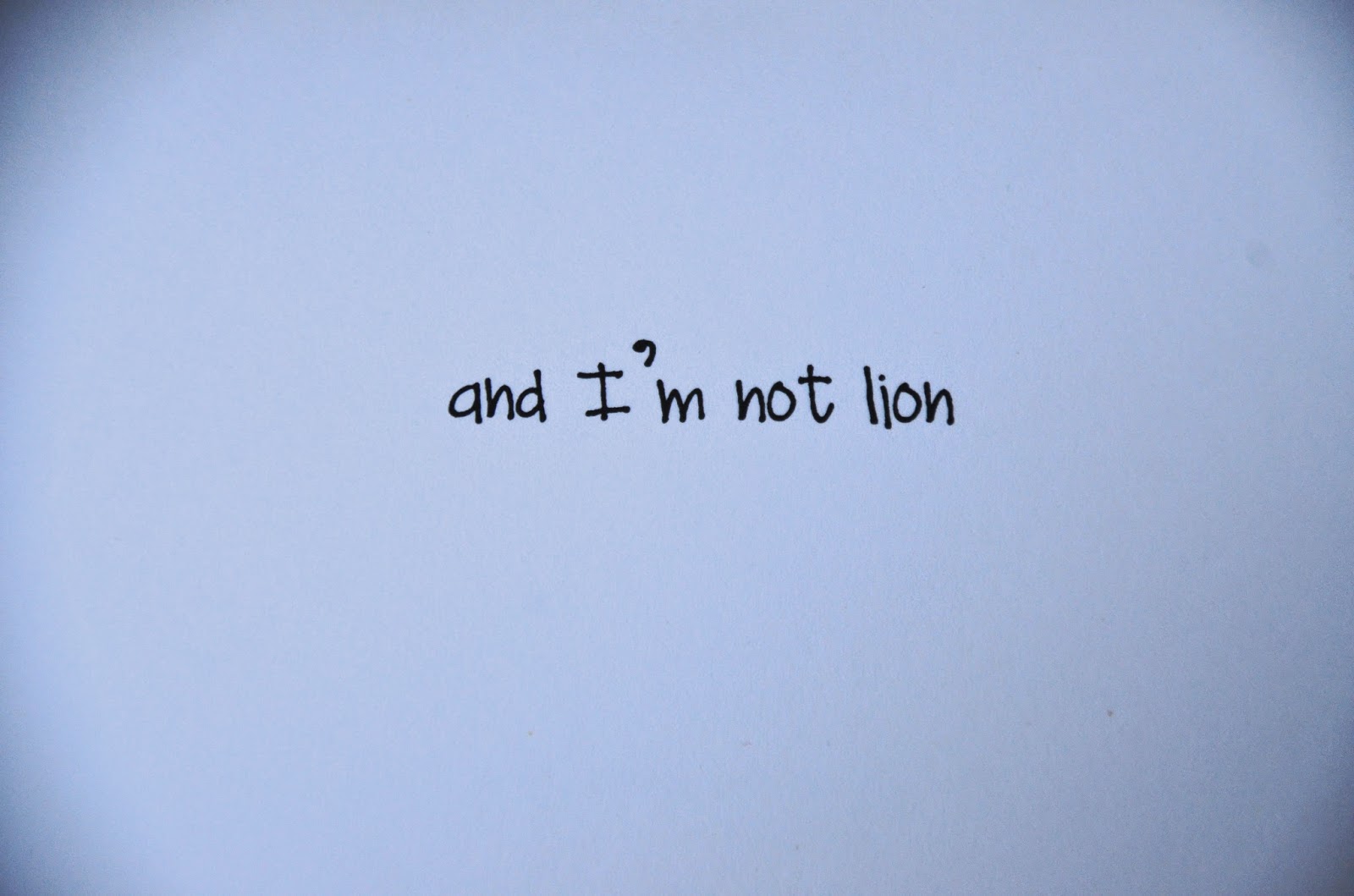 I did have a ton of fun making this cute card. Hope you enjoy it!

This card is available at https://www.etsy.com/listing/220125572/im-not-lion-valentine-card-yellow? 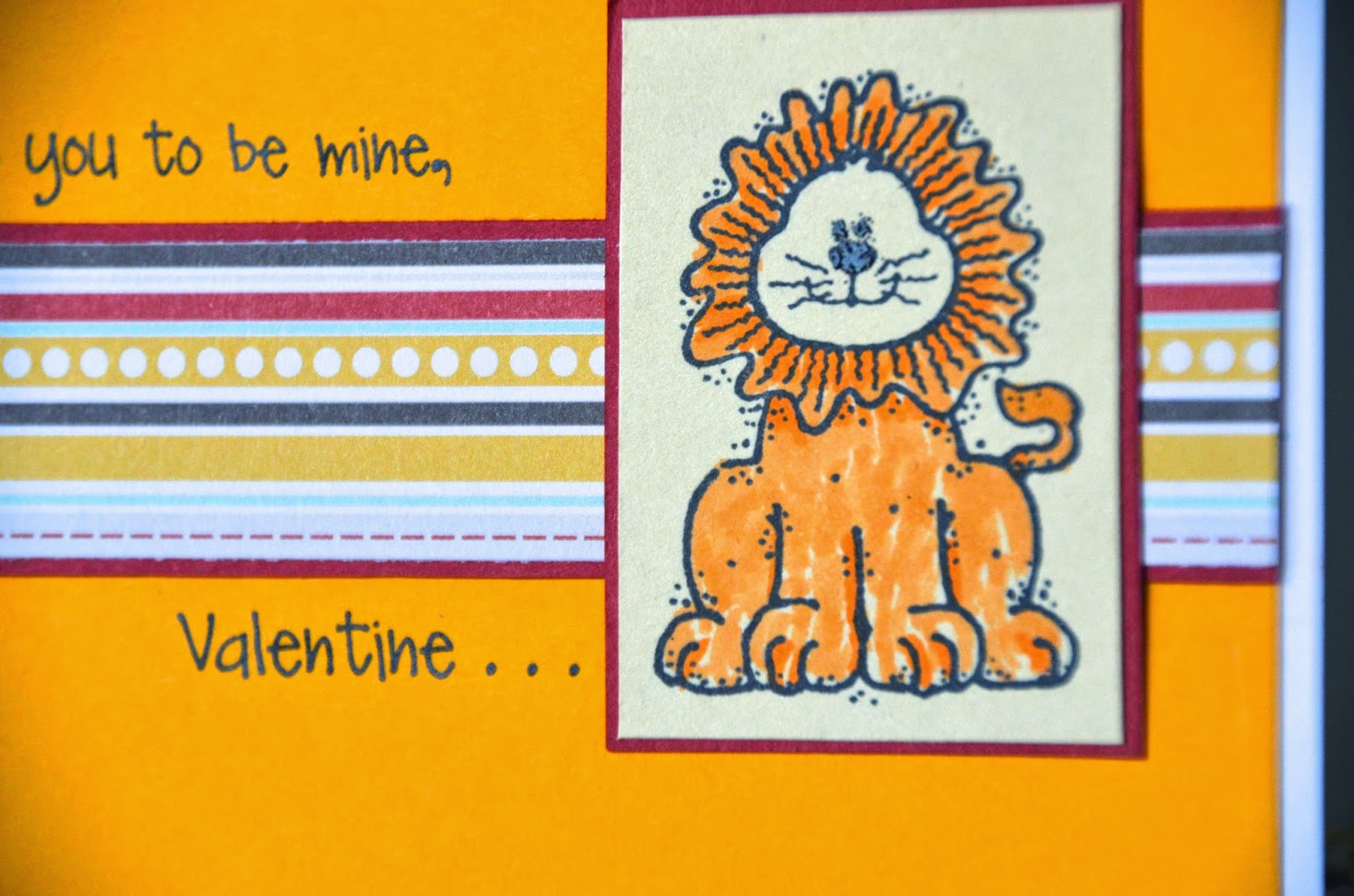 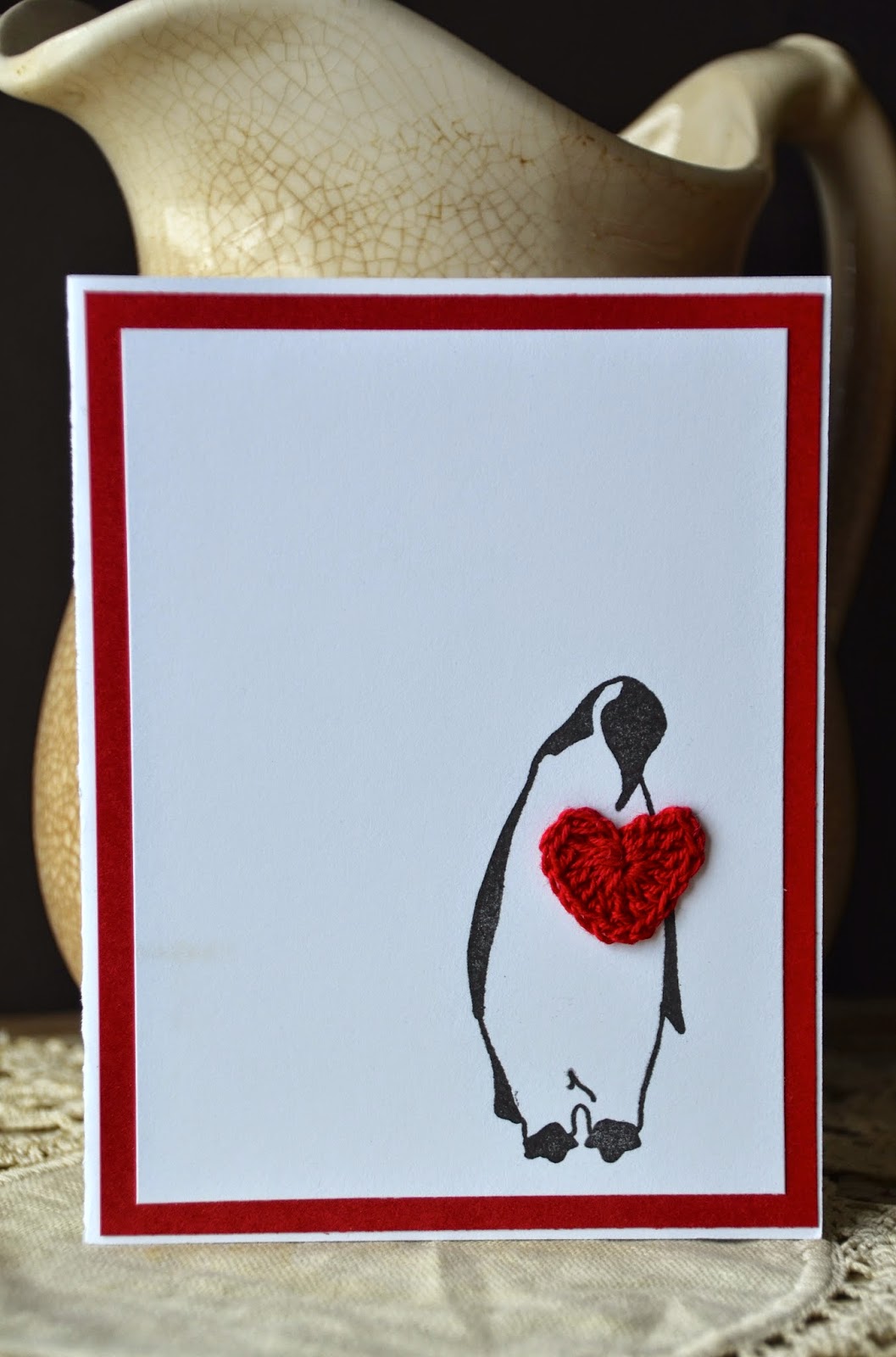 Valentine's Day is just around the corner - less than a month away! This is a card design that I absolutely love. The perfect little penguin with the big (crocheted) heart! Inside is a simple sentiment:
"You make my heart happy."

A great card for anyone on your list, male or female.

The design is very simple: a plain white card, 4-1/4" x 5-1/2", in a vertical format with a side fold. I've layered on a piece of red card stock and then topped that with a piece of white card stock. The penguin (Connor's Collectibles" is rubber stamped in black ink and the little heart was crocheted by my dear mother!

I prefer to print the inside sentiments of my handmade greeting cards with my computer and laser printer. That way, I can put pretty much any sentiment or verse I desire inside and I can use the font style and size that I think fits the card.

You can buy this card by visiting https://www.etsy.com/listing/219461517/handmade-stamped-penguin-valentine-card?

Thanks for stopping by!
Terri
Posted by TWeber at 7:54 PM 1 comment: